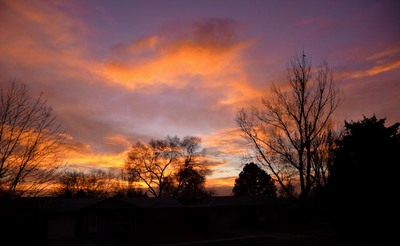 January 21: Twelve participants headed out eagerly to exercise their skills in Raptor ID after Aiken Audubon’s annual Raptor ID program last Wednesday! The day started out with ground fog, which made it difficult to see raptors. By 9am the fog started to burn off and the birding picked up. All the Red-tails we saw were hunkered down looking darker than they are in the fog. The predicted howling winds held off until noon when we were heading back. Those winds did allow us to see large raptors like a Golden Eagle and Ferruginous Hawks almost hover in place at times. 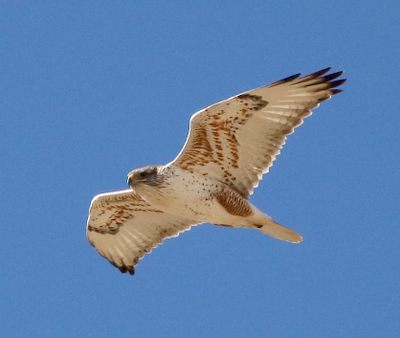 We didn’t get all our targets but there was plenty of practice identifying Red-tailed Hawks perched and Ferruginous Hawks (right) perched and in flight!

The Ellicott Highway Golden Eagle nest is active again this year with an immature female and adult male in residence. We had lovely views watching the female working on the nest and short flights from sandstone bluff to sandstone bluff! The male watched over all from a perch on a large power pole. 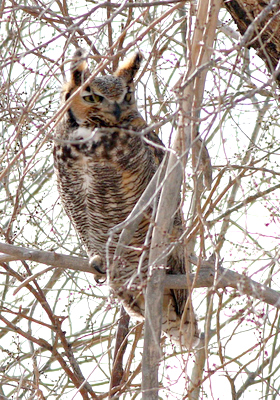 Our last sighting was over unidentified prey with three soaring and sitting Ferruginous Hawks, a Golden Eagle and two Common Ravens who were harassing the eagle more than the Ferruginous Hawks! 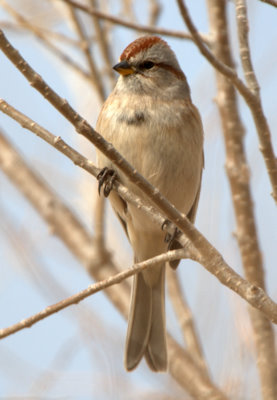 January 28: The weather was cold in the morning but winds were light as the nine birders searched the utility poles and fence posts east of Fountain for raptors and other birds.

Everyone agreed that the Merlin was the best bird of the day. We all appreciated having time to try and figure out what the hawk was without the answer being provided too quickly. Everyone improved their raptor ID skills!

Additionally, we had one porcupine sleeping in a tree and several peacocks at the “Peacock House” at the intersection of Finch & Hanover. 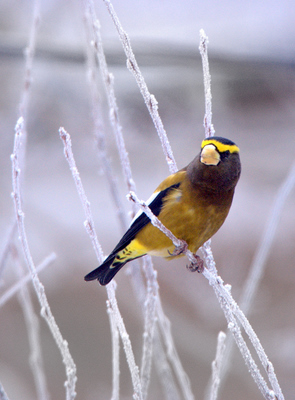 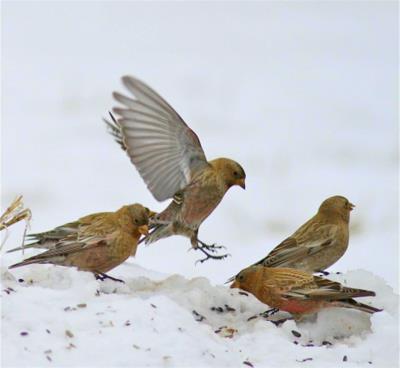 Once again, our hospitable hostess Beverly welcomed us into her house and yard. There was plenty of snow, and we immediately spotted our target species: Rosy-finches! Evening Grosbeaks, House and Cassin’s Finches, and Downy Woodpeckers were also present in abundance. A freezing fog cut our time short (the only ones not frozen were the photographers, who were too distracted to notice).

We then moved to Polly’s house, across town. A different habitat meant different birds. Pinyon Jays, Goldfinches, more woodpeckers, and others put on a show right in front of the picture window next to the kitchen.

Lunch at the bakery in town was followed by a drive further west down the highway that produced plenty of additional birds. As always, it was a totally successful trip.

There were 17 of us Saturday morning for the Kettle Creek Lakes trip. It was a beautiful sunny morning and the wind was mild, but it did pick up later in the morning. We saw a total of 23 different species: 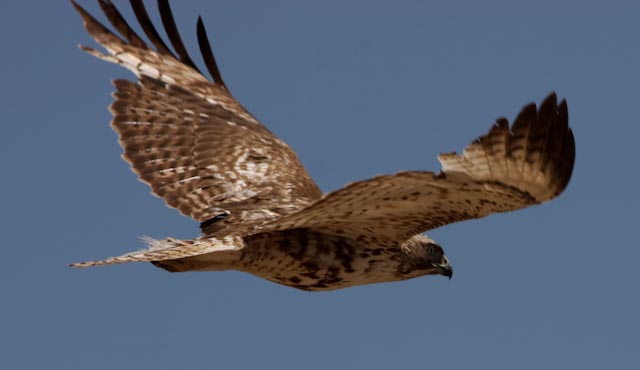 Early this morning 9 brave souls met at Fountain Creek Nature Center to head out into the wilds of Eastern El Paso County, braving heat, dirt and bugs! Lots and lots of bugs!

We had six target species that I had found nesting during an earlier recon for the field trip. I didn’t tell anyone what we might see, but left it up to them to spend some time looking at each species’ ID characteristics, to build confidence. I believe that everyone now feels more comfortable with Raptor ID. 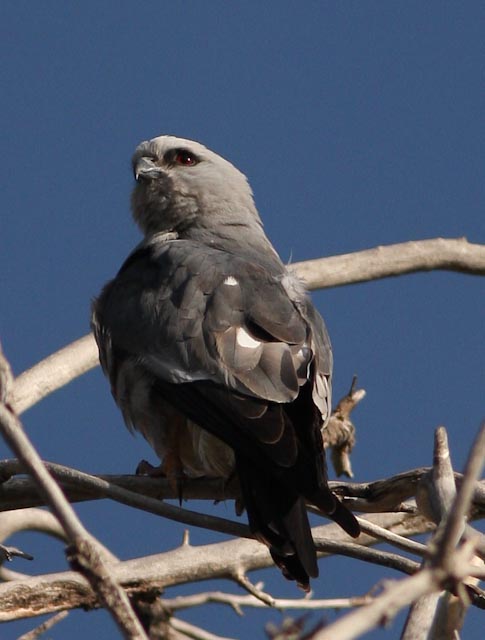 Our first species is new to nesting in El Paso County as of last year. I believe there will be more Mississippi Kite individuals nesting in Colorado Springs as the years go on! Everyone got wonderful looks. The key lesson was to be patient looking for the Kites. There were many neighborhood people curious about our group, and we shared the sightings with them,

Next up was a Red-tailed Hawk nest with three near-fledglings. Everyone enjoyed being looked at while we were looking at them. We also saw a single Dickcissel on Hanover Rd near the first bridge. 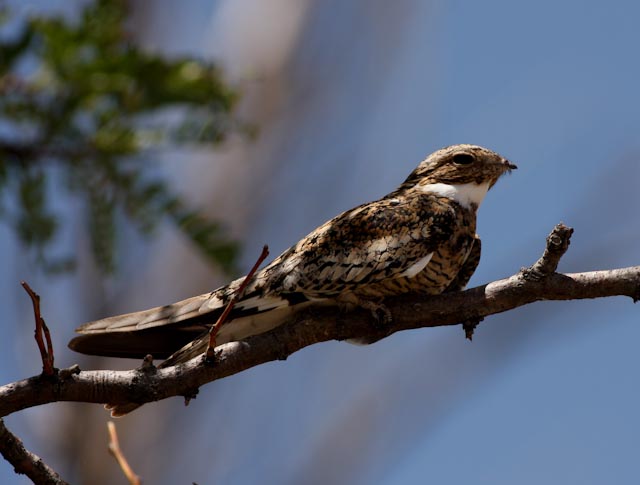 Then it was off to the Great-horned Owl nest, which is in an old abandoned building. Along the way we saw 4 American Kestrels, 1 Prairie Falcon (flying away) and a Loggerhead Shrike, along with lots of Lark Sparrows and Common Nighthawks, a few Mourning Doves, Northern Mockingbirds and Cassin’s Sparrows. Then there were the ubiquitous Western Meadowlarks and Horned Larks.

Next we looked for Burrowing Owls. Many prairie dog towns in eastern El Paso county have been decimated by plague, however several large towns were also destroyed by landowners turning their land into cattle or crop fields. Such a shame! I found one pair of owls on Deering Road, then the other one on Laupe between Neely and Neely roads. At a plowed field, Christine saw a Mountain Plover flying away. There were also tons of grasshoppers all along the road!

Then we were off to the Antioch Swainson’s nest, but no one was home. It was quite warm and we weren’t surprised to find the parent had gone hunting for a while. Luckily, I knew of a second nest. where the mama Swainson’s was dutifully setting. Again, there were many Lark Buntings along Sanborn Road.

Lastly, we stopped at the Ellicott Hwy. Golden Eagle nest and watched mama shade her nestling.

Overall, it was a great trip!

It was only the hardy souls who ventured on this trip to Chico Basin Ranch. Temperatures were well over 100 and shade was scarce. Nevertheless, they saw 23 species! 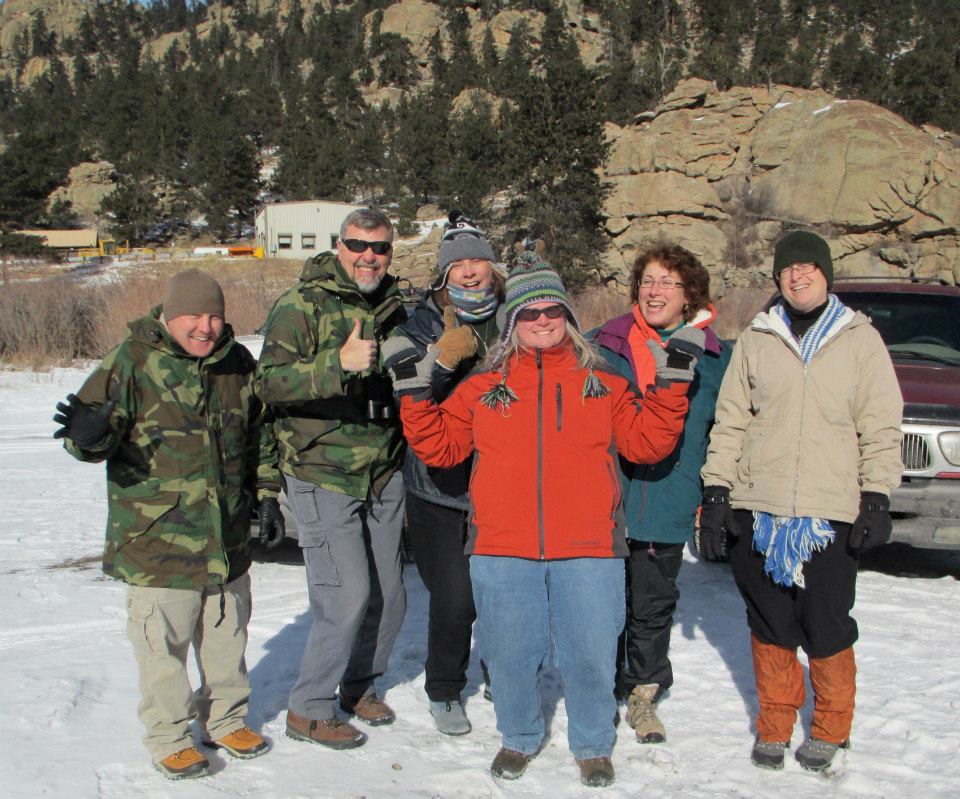 A merry group of 7 people came out on a cold day to observe and photograph ice and birds that survive and thrive in that environment.  When we arrived in the canyon, it was all of 0 degrees, and that never changed.  That was all right until the wind started howling—wind chill is tough to take no matter how enthralled we are with the antics of the American Dippers!  Even so, I think everyone had a great time.