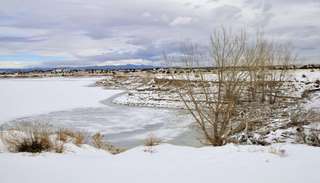 In spite of snow in the forecast, the day started quite nicely, with temperatures in the mid-40s, a light breeze, and cloudy-bright skies. Only ten of us braved the trip, and we were richly rewarded. 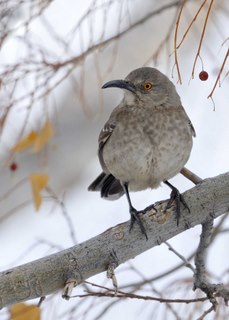 There was only one Bald Eagle to be found, but other birds included both the expected and the surprising. Highlights included three Sage Thrashers, a Curve-billed Thrasher (in the Visitor Center parking lot!), and a Black Phoebe.

We were also quite patriotic, with American Crow, American Coot, American Kestrel, American Robin, and an American Pipet! 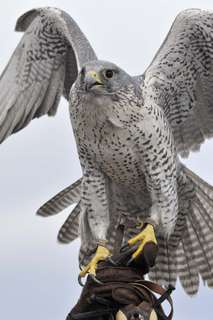 Although the release of the rehabilitated raptor was cancelled due to the impending storm, the Air Force cadets flew their falcons, and several rehabbed birds were on view amid all the other booths and displays.

Thanks, Gary, for yet another successful and enjoyable trip to Lake Pueblo! 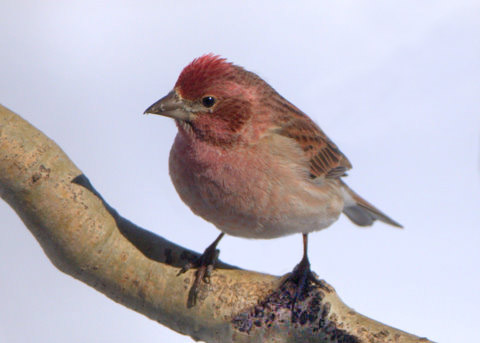 Six women in two cars headed south early Saturday morning for what all would agree was the best birding day ever!

The weather was much warmer than we’ve had recently, and jackets were quickly shed. Still, La Veta had about three feet of snow on the ground, and more piled along the roads and paths. Icicles hung from the eaves to the ground, and huge drifts spilled over the roof tops. It was all pretty impressive, not to mention dazzlingly beautiful.

We arrived at Beverly’s home in La Veta around 8:45. She was up and greeted us with a huge smile, a comfy kitchen table (with windows overlooking her backyard), and a gazillion birds! While the Rosy-finch numbers were down (due to the nice weather), there were still plenty for viewing and photographing. Evening Grosbeaks were also abundant. Cassin’s Finches glowed ember-red in the sunlight. 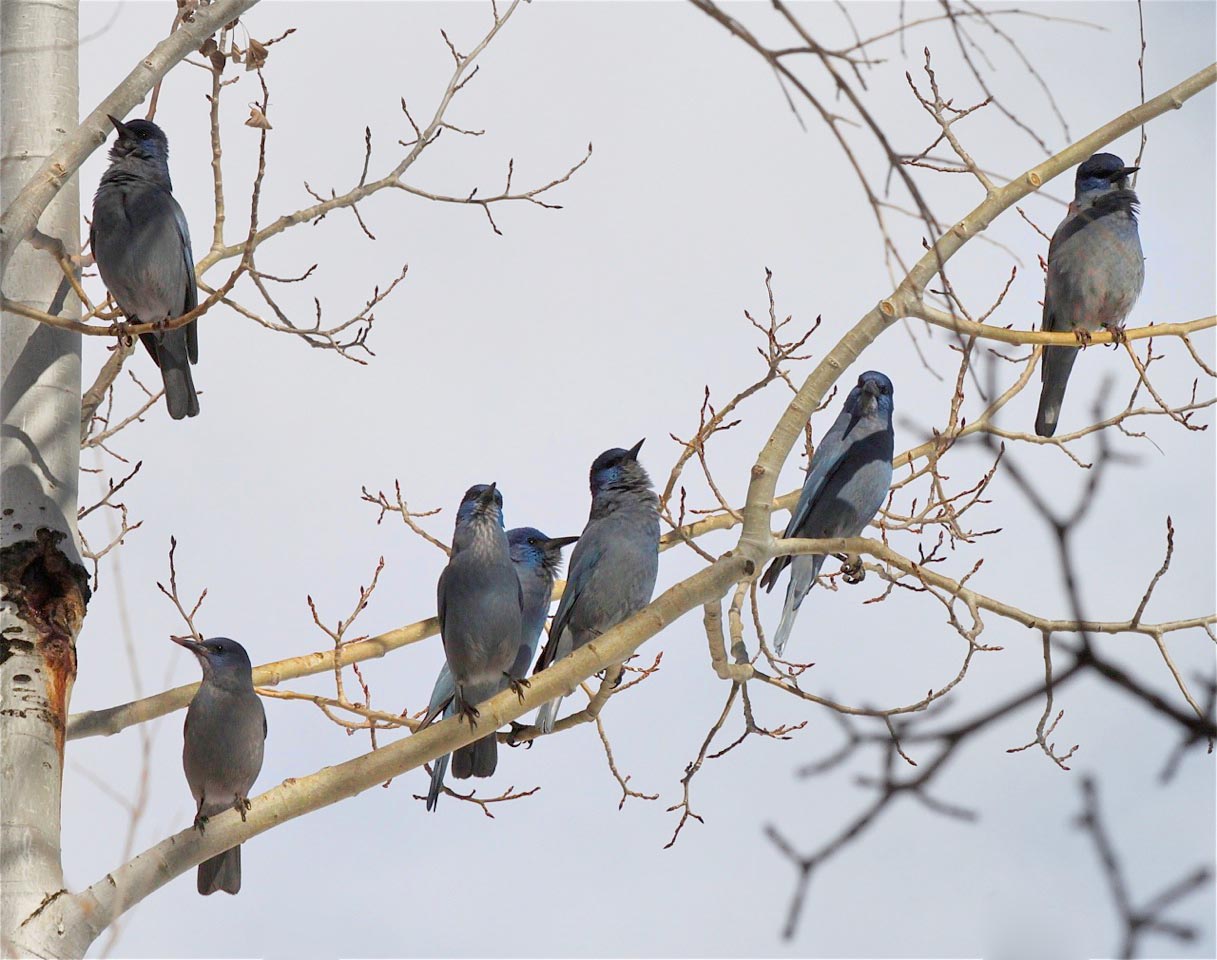 Next we headed across town to Polly Wren’s place. The Pinyon Jays hadn’t yet arrived for the day, so we enjoyed the other birds (including a White-winged Dove!) and each others’ company. Then, with a whirl of wings and raucous chatter, a huge flock of soft blue Jays swept all the other birds aside. We lost count at around 65 birds. The feeders were quickly emptied while shutters snapped. The hard part was getting a photo of just one bird, since the others constantly flew in front of the camera.

With a quick stop for lunch, we headed up Hwy. 12 to hunt for more species. Beverly came with us, making it even more fun. It’s a good thing there isn’t much traffic on the highway there, as we were constantly slamming on the brakes—first for some cottonwoods full of turkeys, then for a Bald Eagle, followed by an immature Golden. A Lewis’s Woodpecker was spotted on the other side of the road. We finally turned around and headed back, only to spot a small, squat shape on a branch overhanging the pavement. “That was an owl!”… and the brakes screeched again. Sure enough—a Northern Pygmy Owl was awake in the middle of the afternoon! 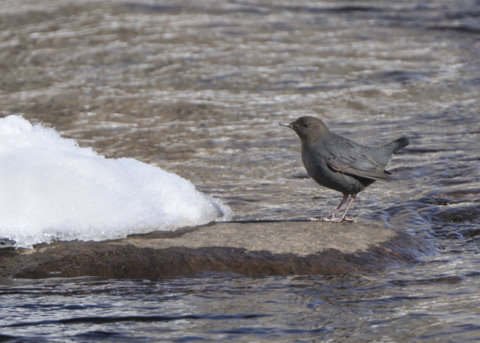 One last stop at a bridge yielded an American Dipper doing its characteristic deep-knee bends. Then we were back in town, dropping Beverly off at her driveway and thanking her for her amazing hospitality. Five out of seven birders added lifers to their lists, and most of us got “state birds” as well. As we drove back to the Springs, we were already planning our next trip. We hear that Beverly gets Rose-breasted Grosbeaks in the spring, followed by swarms of hummingbirds in the summer. 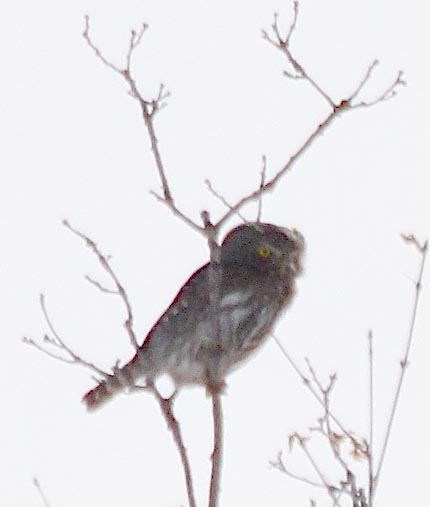 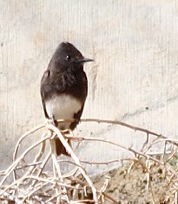 We had a good hike with Brandon today. The morning was very nice, but it did get terribly windy in the afternoon. We had nine participants and Brandon, a nice size group. We had over 60 species with trip highlights including: Burrowing Owls; Great Horn Owlets; Yellow-headed Blackbird; Snowy Egret; Bewick’s Wren; Say’s Phoebe; Black Phoebe (pair nesting! ); Bushtit; Bank, Barn, Cliff, Tree Swallows; White-throated Swift; Wilson Snipe; Greater & Lesser Yellowlegs; Osprey (on nest); White-winged Dove; Yellow-rumped Warbler; Turkey Vulture; and Scaled Quail. AND before the group got there, Brandon found a bobcat in a tree at the reservoir! He took a great photo of it! (We even saw some cool green beetles too!)

Report and photos by Jeannie Mitchell 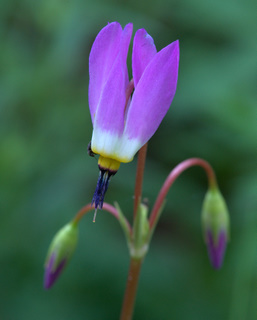 Another gorgeous summer day provided the backdrop for blooms, butterflies, and birds. The Yellow Ladyslipper Orchid stem count was down due to the dry spring. 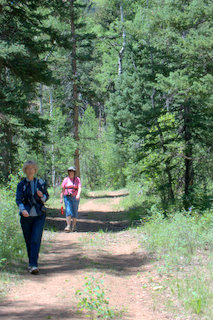 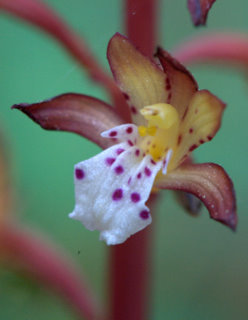