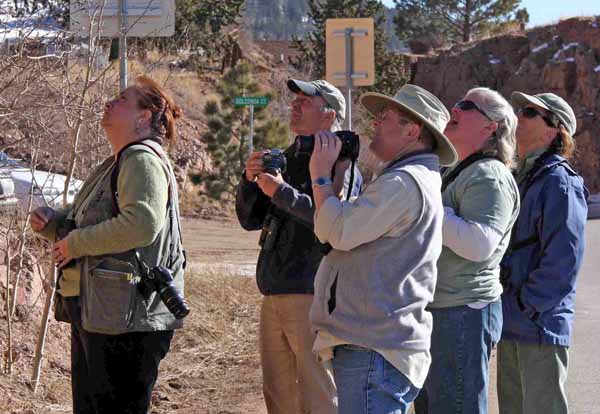 Saturday: The weather was wonderful for January—mid to upper 30’s with little to no wind. We saw lots of raptors sitting on power poles on the way up and a coyote below Woodland Park heading into the woods. We didn’t find many birds in Cripple Creek, but Victor really produced some great sightings, including a fox. We had around 200 Rosy-Finches! Most were Gray-crowned, with a few Black and Brown-capped thrown in. We even got three Hepburn’s Gray-crowned Rosy-Finches, visiting from the coast. On the way home we got a nice surprise with a young Mountain Goat feeding beside the road. Everyone went home with some wonderful images and a few tips to help them with their bird photography.

Sunday: This day’s trip was slightly cooler, with a small breeze that probably affected what we saw. We had the same poor luck in Cripple Creek, but the drive up to Victor produced some nice birds. In fact, our day was characterized by raptors. First we saw an interesting second-year dark-morph-ish Rough-legged Hawk. That was followed by a Prairie Falcon. While we were looking at a few finches, we heard a Northern Pygmy Owl vocalizing and moving around us trying to avoid the crows and jays that were harassing it. We didn’t get a look at it, but it was a cool encounter. We also had fly-bys of another second year light-morph Rough-legged Hawk and a second year Golden Eagle!

The Rosy-Finches were not as numerous as on Saturday, but we did see them. A flock of about 75 fly around us but didn’t land. Everyone was disappointed but philosophical about the small numbers of Rosy-Finches seen.

Spring snowstorms forced the trip to be postponed several times, but, the intrepid birders finally made it to Chico Basin Ranch. Here are the lists, by county, of birds sighted.

Nine intrepid birders braved the cold and damp to spend an early morning at Ramah SWA and Mallard Lake. Birding was rewarding in spite of the weather, and we spotted 45 species. 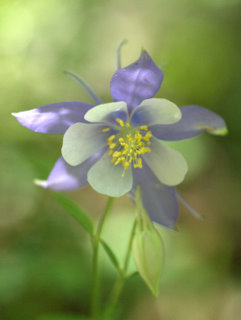 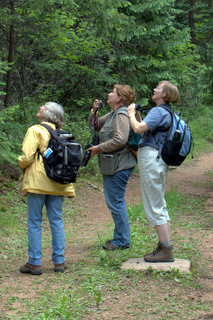 This hike is always spectacular, and this year was no exception. Yellow Lady Slippers, Coralroot, and Green Bog orchids were sighted. A broadtail hummingbird sat on her nest. A sapsucker peeked out of her nest cavity. Columbine was everywhere.

For one participant’s story about the trip, go to her “Mountain Plover” blog.

It turned out to be a gorgeous day, and seven lucky birders spent it enjoying the birds and the outdoors. Highlights included great views of a Canyon Wren, all three kingbird species, and a Peregrine Falcon. Several participants scored a “lifer” with the last birds of the day: a flock of Lewis’s Woodpeckers.

After the snow of the past several days, Saturday dawned clear and sunny, eventually reaching a high of around 60 degrees. At 8:30 am, the muddy paths were still frozen, and we crunched along through the crusty snow. Unfortunately, both ponds were almost totally frozen. Highlights included a Northern Shrike sitting on the uppermost top of a tree, and an owl, most probably a Great Horned Owl, flying through the denuded cottonwoods. In all, we counted 22 bird species. Also of note was the beaver lodge in the lower pond and the large-but-almost-gnawed-through tree trunks in the area.

Maybe because of the storm, everyone was quite anxious to get outside and soak up some sunshine. Ten people participated in the field trip. We all agreed that this site would be an excellent place to bird during spring migration, and intend to come back then.