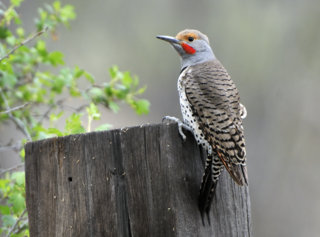 By August, my husband and I realized we’d nailed scraps of wood across 15 large flicker-sized holes. Piles of fluffy insulation littered the ground beneath each one. That fall we replaced much of the cedar siding on our house, to the tune of over a thousand dollars. The question became critical: What could we do to prevent the birds from drilling into our new wood?

A lot of people must be having the same problem. A quick web search turned up plenty of suggestions, but not much in the way of success stories. Inflatable owls don’t work—the birds are smarter than that. Flickers quickly become accustomed to hanging strips of aluminum, Mylar balloons, and small colored windmills. What else could we do?
I called the DOW, and was informed that it’s illegal to hurt native wild birds. You can poison the pigeons in the park (they’re considered an invasive species from Europe), but woe betide you if you take a pellet gun to a Northern Flicker. I related this to my husband, who seemed disappointed.

I did some research into bird behavior. Perhaps the birds themselves would present a solution. That’s when we decided to build the nesting box. Flickers are territorial, and if we could get them to nest in the box, perhaps they would give up on excavating their own home. Plus, they would drive away any interlopers. There was some sort of poetic justice in having flickers patrolling our yard for other flickers.

As far as I can tell, we did everything right. We even packed the box with wood shavings and sawdust. We hung it right over a hole they’d been chiseling, high up on the end of the house. But while the birds enthusiastically emptied out the box, they never moved in. Instead, they started a new hole about a foot away. It was very frustrating.

We tried every solution we came across, except one. Pete found several websites selling a “sonic retailer” that, as the ad explained, “uses birds’ own distress calls to create a ‘danger zone’—it frightens infesting birds away for good.” Perhaps that works. At the time, $250 seemed like a lot of money, and I admit I was leery about their claim to be species specific. I had a lot invested in birdfeeders, and I didn’t want to scare all the birds out of the yard. I just wanted the flickers to stop making holes in my house!Well, this year the flickers are here, and our house is still intact. What did we do?

We bought lots of bird netting. Most people are familiar with the black netting that keeps songbirds out of fruit trees. This product is based on the same principle, but is much stronger. It comes in 15-foot wide strips, on large rolls that they’ll cut to length. You just buy as much as you want.

We used this netting to cover three sides of our house that the birds seem to favor. (The fourth side, the front, faces south, and gets very warm during the summer. Plus, that’s where the most people are. For whatever reason, the flickers don’t attempt to nest there. Usually.)

My husband spent an entire weekend on ladders, hanging netting from the eaves. In places where there is a two-story drop, he had to clip two widths together. Now we’re trying to figure out how to access the faucets. I miss the unobstructed view from my office window; seeing the garden through half-inch black netting just isn’t the same. However… we have sustained zero woodpecker damage. Zero. It’s worth it.

Oh, the flickers are here. They climb the tree trunks, empty the suet feeders, and announce their territory by hammering the chimney flashing. Fine. They’re also eating bugs and providing hours of entertainment. We’ve achieved a truce of sorts. Maybe I’ll hang their nest box on a tree somewhere, and see if they use it this year.