November 2019: You may remember that in the last issue, we reported that the State Land Board is re-evaluating its options regarding its largest land holdings, including Chico Basin Ranch. The ranch’s current lease expires in 2024.While the proposed options include sell-ing the entire property for $33 million or continuing to lease to one entity, it would be more profitable for them to split up the ranch. Public access would likely be denied.Aiken is continuing conversations with The Nature Conservancy, the Colorado Natu-ral Heritage Program, and other interested parties regarding how best to preserve Chico and its resources. 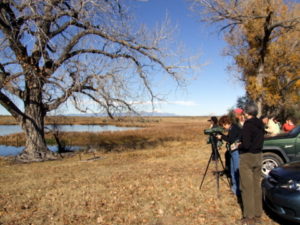 September 2019: For the past 20 years, Colorado Springs birders—in fact, birders across the state—have been accustomed to wide access to the migratory stopover known as Chico Basin Ranch. That may be about to change. Ranchlands (Duke Phillips and family) holds the lease for Chico from the State Land Board (SLB), which owns the property. The 25-year lease expires in 2024.In their August meeting notes, the SLB devoted 33 pages to re-evaluating the Chico lease and increasing revenue. While the proposed options include selling the entire property for $33 million or continuing to lease to one entity, it would be more profitable for them to split up the ranch. The preferred option seems to be dividing the property into three separate ranches, and potentially selling one off. Public access would likely be denied.Almost half (44%) of Chico is designated into the Stewardship Trust. “The designation is focused on large areas of intact, high quality Central Shortgrass Prairie that include globally significant natural plant communities and imperiled species” (SLB August 2019 Board Meeting Information). Dividing the ranch would obviously fragment wildlife habitat due to increased fencing, new ranch buildings, and differing management styles. This is the largest tract of undeveloped land owned by SLB, and the lack of fragmentation only increases its conservation value as a wildlife and migratory corridor. It’s possible that SLB would put a conservation easement on any property it sold, but that would be a long shot.The State Land Board will be meeting in El Paso County on September 11 and 12.